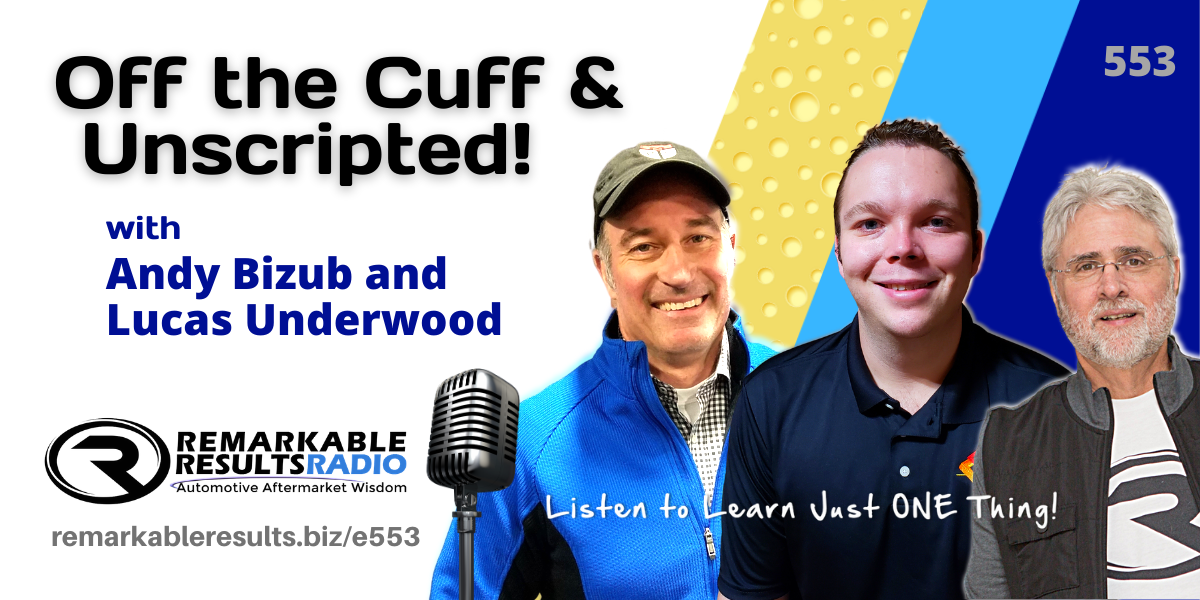 This episode speaks for itself. Raw and Unscripted. And intended to push a button or two maybe one of yours. It’s a collection of ideas and thoughts from my guest’s world which resulted in nothing more than some extraordinary talk.

They share the challenges of attracting and retaining customers. Lucas had guidance from his coach that told him that some shop owners often fall in love with their problems and not the solutions. While Andy remains choosy in all of the customers that come through his shop. He programs his business to attract his right customers. This and much more.
Find the key talking points for this interview with Andy Bizub and Lucas Underwood at remarkableresults.biz/e553. 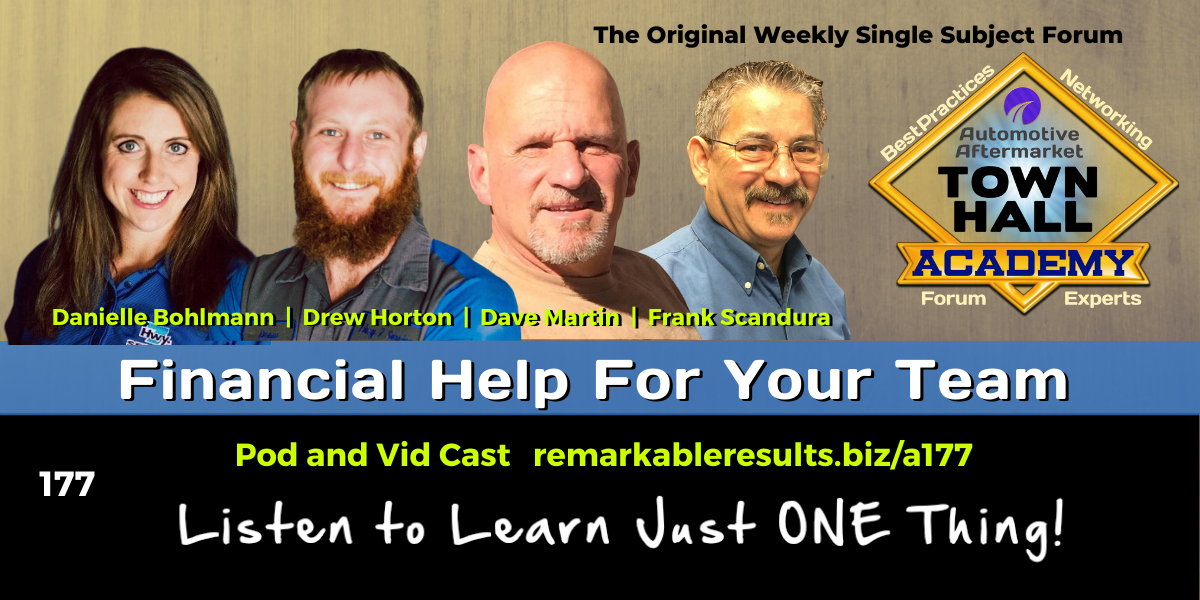 THA 177 Financial Help For Your Team

This is an episode I’ve wanted to do for some time. This living paycheck to paycheck syndrome can be corrected. Many spend beyond what they make and they get a raise and the differential is also gone. It is usually a spending problem, not an earning problem.

A bunch of great insights here and you can find them on the show notes page at remarkableresults.biz/a177. These key talking points will make for a great meeting agenda. 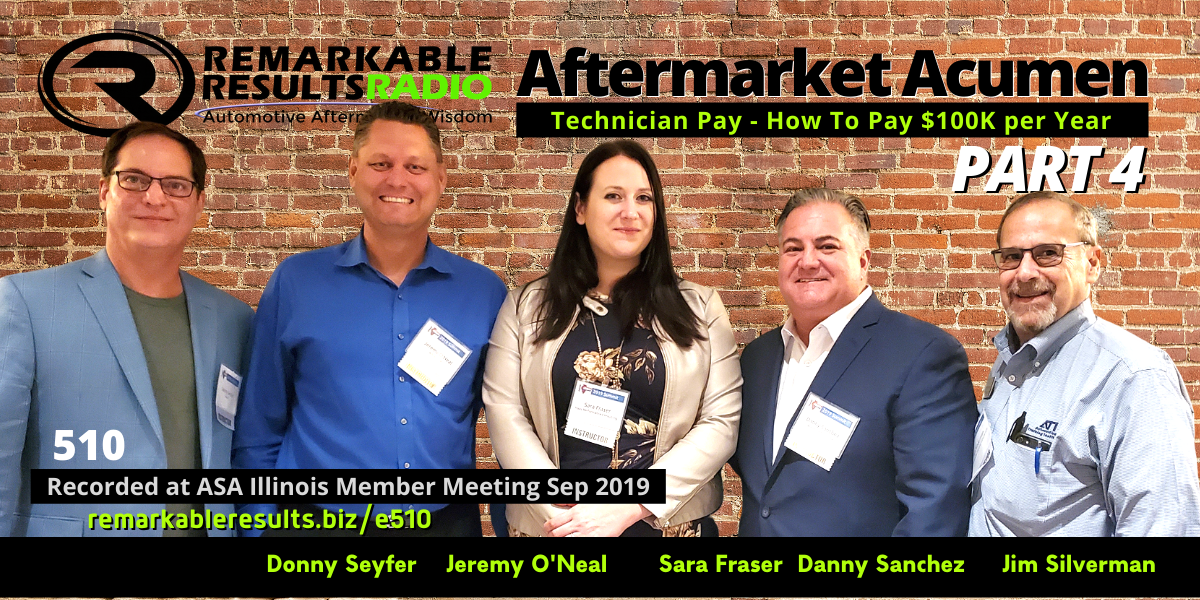 Donny Seyfer the executive officer of NASTF (National Automotive Service Task Force) and Partner in Seyfer Automotive in Wheatridge, CO. Listen to Donny’s previous episodes HERE. Jeremy O’Neal President and lead sales trainer for Advisorfix, began his career as a Service Adviser and moved into Service Management at the dealership level for VW, Audi, and Porsche. He consistently… 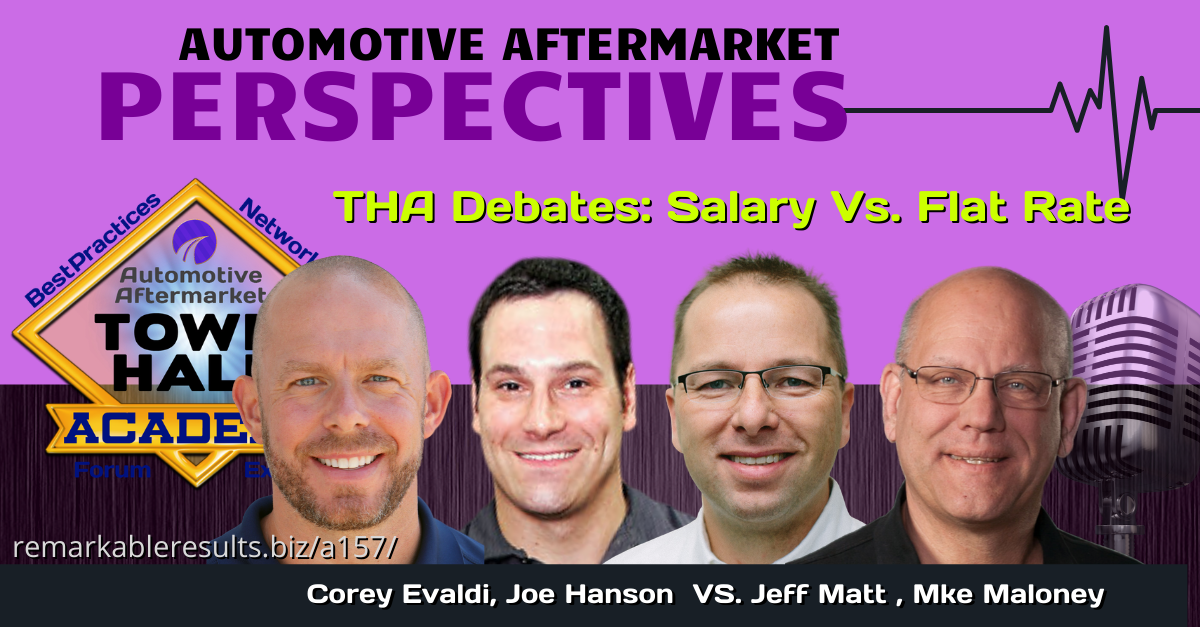 https://youtu.be/yhjxnuX2gOw The Panel: Jeff Matt from Victory Auto Service in Minneapolis and St. Petersburg, FLA, was featured in episode 48. Jeff owns six locations with one being in Florida. He has over 40 team members and has grown through acquisition. Jeff opened Victory in 1997 as a one-bay shop and has slow steady growth over the… 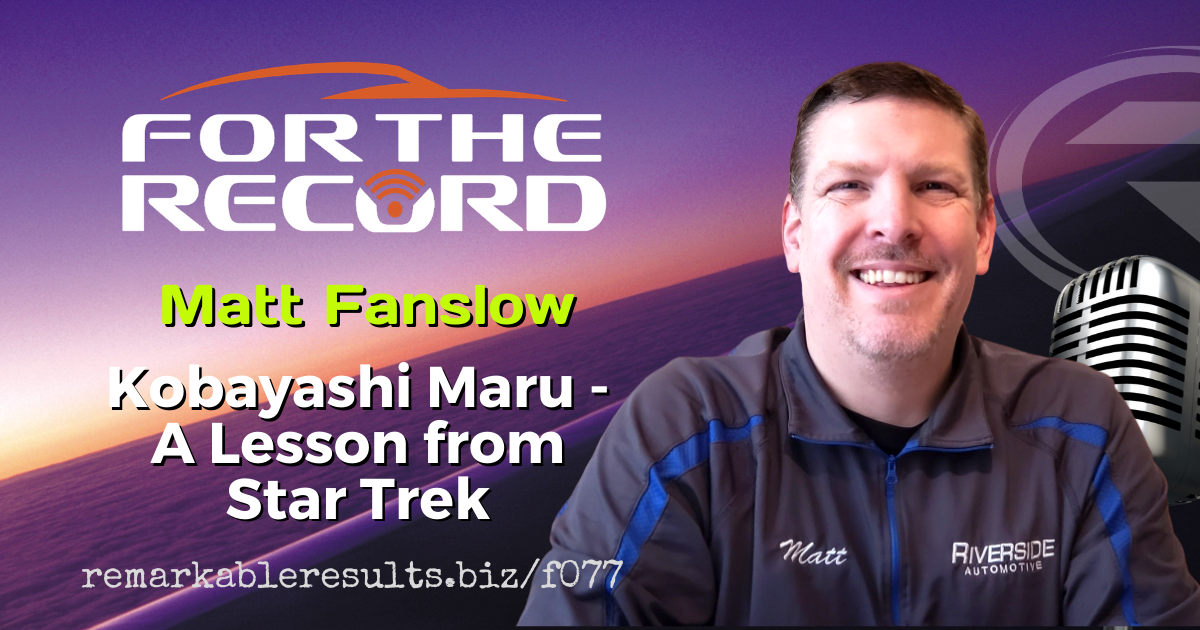 Matt Fanslow is the diagnostic tech/shop manager at Riverside Automotive in Red Wing, MN. His primary responsibilities are to diagnose driveability and electrical/electronic issues, and perform most all programming, coding, initializing, adoptions, etc. Basically, if it needs to be figured out or has wires, it goes to Matt. He’s been a tech since 1996. Matt is also… 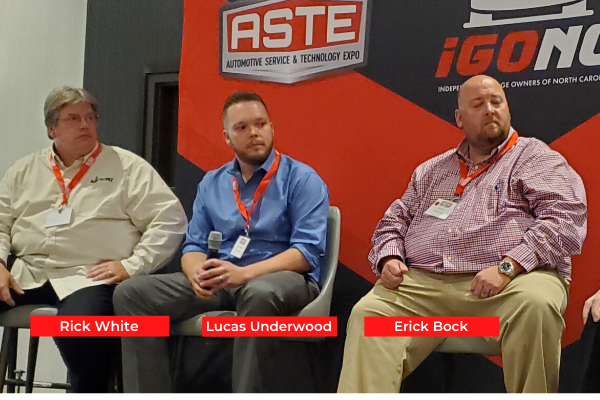 This episode is packed with great gems of wisdom and gives you a bird’s eye view not only on some great benefits and pay ideas, but as we all must understand it starts with having an enduring business culture. All the pay in the world doesn’t trump an acidic culture.

Building a business focuses on the team you have and how to treat it like a family! We also tackled the creative benefits that entice and motivate employees more. And learn what are the most important tactics to attract and keep technicians? 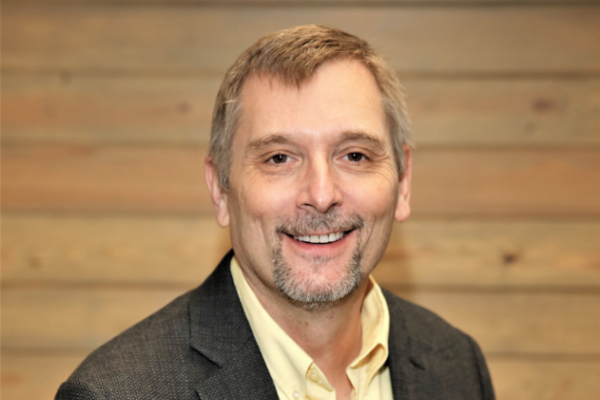 As you go through this episode you’ll understand the intricacies of getting your employee’s pay reflective of the department of labor laws. It is not as easy as you have come to manage.

Mike Davidson from Parkway Automotive in Little Rock, Arkansas, been in the industry for more than 30 years and a business owner for over 18. Mike Davidson is an AMI graduate, an ASE Master Technician, is a part-time Elite Worldwide coach and was recognized as the Arkansas NAPA/ASE tech of the year seven years in a row. Mike helped start the Little Rock chapter of ASA and is currently an officer.

Mike tells the story of why he wrote the book. He’s been a big contributor to his aftermarket peers and this book is another example of Mike’s tenacity to get it right.
There are a lot of things to take note of especially when you need to conform to the letter of the law both Federal and State as it relates to wage and hour.

This is no smoke and mirrors. I recall friends who got burned on paying bonuses and which employees qualified to be salary. 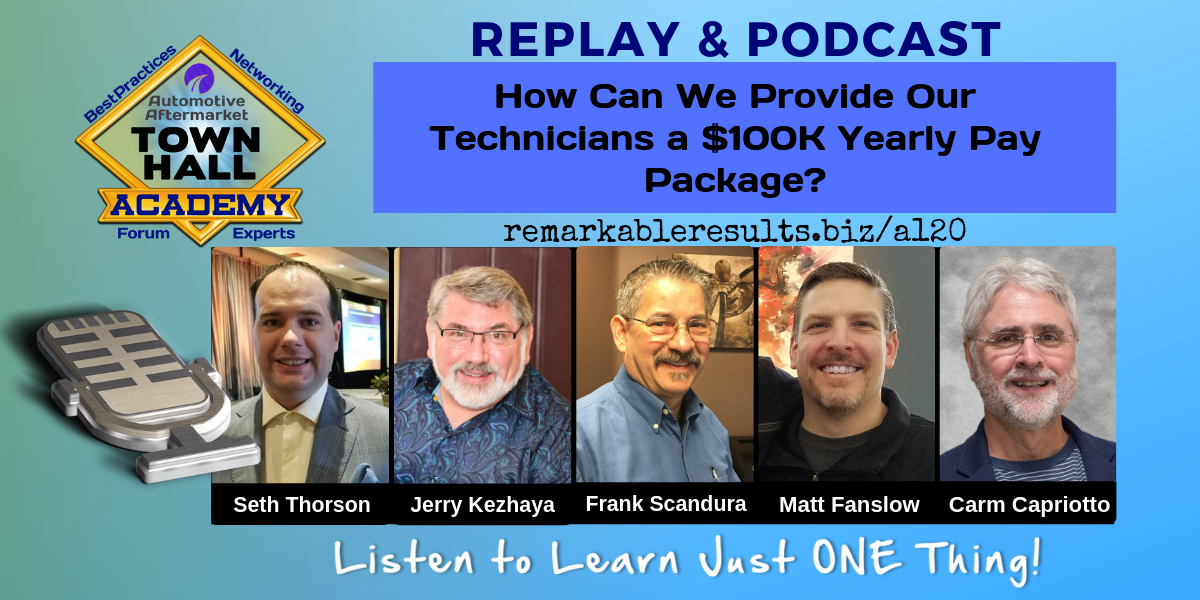 How Can We Provide Our Technicians a $100K Yearly Pay Package?

We covered a large swath of reasons to review technician pay and to create a fair and adequate compensation plan based on criteria that is a win, win, win for the tech, the owner and the customer.
Our panel consists of Seth Thorson, shop owner at Eurotech Auto Service New Brighton, MN, Jerry Kezhaya, shop owner at The Auto Shop in Plano, TX, Frank Scandura shop owner at Frank’s European, Las Vegas, NV and Matt Fanslow, Shop Manager/Lead Diagnostician at Riverside Automotive, Red Wing, MN.

You’ve heard of the struggles and have most likely had your own issues with losing and hiring technicians. Our discussion is not the scientific answer however it goes a long way to helping you make decisions to retain, create loyalty and ward off the loss of our smart and talented technicians to other shops and other industries. 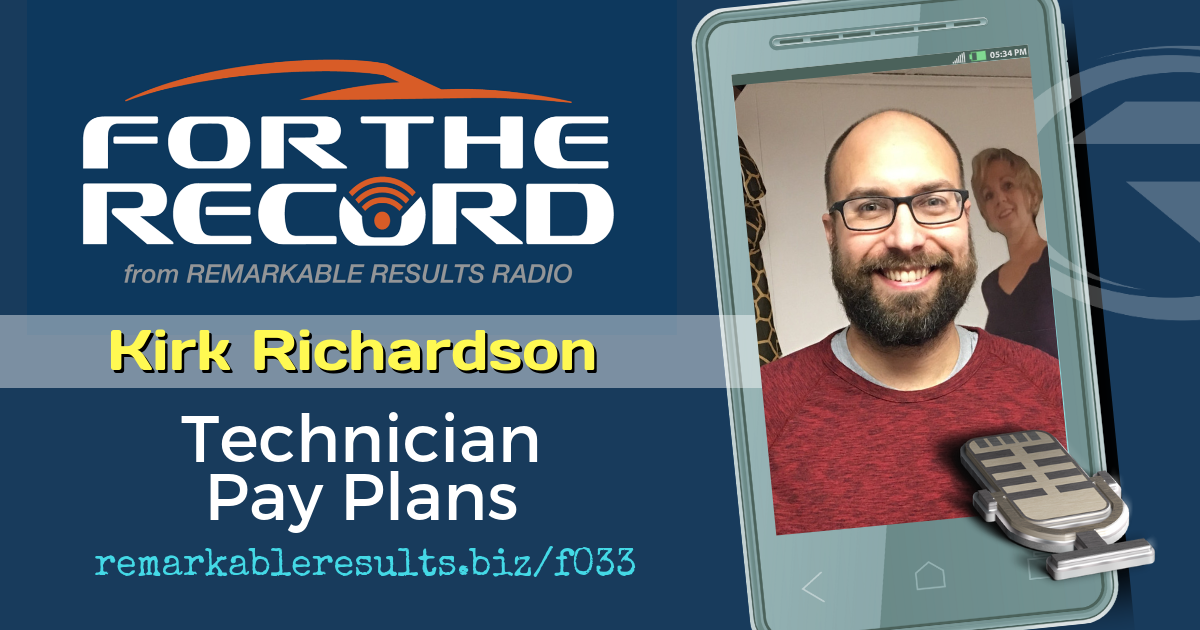 Kirk Richardson is a young and successful entrepreneur. Born into a blue-collar, hard-working family, he was a below average student in high school and college. At the age of 22, he left school and started his first business. He bought his first three bay shop at the age of 24. Seven years later he bought his…